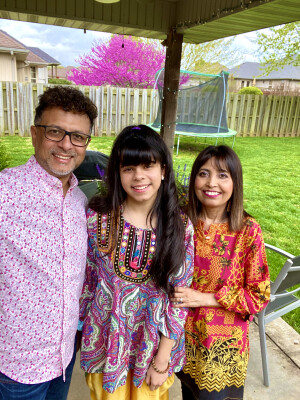 ENGLAND — Chris and his wife Nasim are originally from Pakistan.  Chris got saved from a Muslim background in Pakistan. Two years after he got saved he married his wife Nasim and moved to the U.S.A. Once in the USA Chris and Nasim pursued the American dream and worked tirelessly in corporate America for ten years until they got called to missions at their home church in Naperville, IL.

In 2000, Chris and Nasim went back to Pakistan as AGWM missionaries working with Teen Challenge for two years. On March 17, 2002 they were seriously injured in a suicide attack at their church in Pakistan. A suicide bomber entered the church sanctuary and hurled 7 grenades at the congregation. One grenade exploded just 39 inches from them. The suicide attack left five people dead including two American nationals.  50 people were injured. Three months after the attack Chris and Nasim were brought back to the USA for additional treatment and counseling. In spite of the attack that had left them physically and emotionally hurt, Chris got his license from his district and in 2003 they returned back to Pakistan as AGWM Special Appointed Missionaries.

After their return to Pakistan Chris and Nasim started the Urdu Fire Bible Project. Chris also taught English as Second Language to the Afghan refugees. The school was shut down because of a serious threat from Taliban.

In 2005, Chris and Nasim were blessed with their daughter Hannah while serving in Pakistan. In 2007 they returned to the USA for itineration when Chris received his ordination from his district. In 2009 they transferred to England to reach the Muslims.

To send a note of encouragement to Chris & Nasim, click the button below.