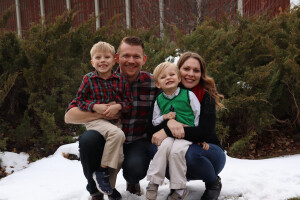 Nathaniel & Lindsey Banke - FORT COLLINS, COLORADO USA. Nate and Lindsey are missionaries with Chi Alpha Ministries at Colorado State University. Nate started his collegiate career at the University of Idaho where he played football, and ministered to his fraternity.  However after receiving a specific word of the Lord saying to go to Colorado, he transferred to the University of Northern Colorado. It was there that he found Chi Alpha, and upon graduating from college he realized that campus ministry was the calling that had brought him here.  After spending a year of training in Texas, at Chi Alpha’s most successful ministry, he again felt the calling back to Colorado.  Realizing that pioneering a ministry in a state where there were no active Chi Alpha ministries would require more than he could do by himself, he casted this vision/dream for re-pioneering Chi Alpha in Colorado to ten friends who would ultimately join him to re-pioneer the ministry at Colorado State University.

Lindsey graduated from Oregon State University, where she was involved in campus ministry and it completely changed her life. It was the first time she had ever had Godly women in her life that she could follow, which blossomed in her a desire to reach younger women the same way.  Upon graduating, she considered full time ministry but felt God telling her “not yet,” so she ended up in public accounting for a few years. When she met her husband Nate, he was already in Chi Alpha and it made total sense that now was God’s perfect timing for her to join him in ministry. She is so thankful to be part of this great movement!

Nate's message is that our future CEOs, politicians, and world leaders are currently studying in our universities. To reach them during this key time in their lives is to affect the course of this generation. The goal is not just to reach students with the gospel, but to raise up our young people to play a key roll in reaching their universities and the world. The XA at CSU has taken up the challenge to pioneer the first ever XA in the country of Russia. For the next five years, they will be sending a different staff couple from their ministry for year long assignments, leading teams composed of give-a-year graduates and study abroad students from their ministry in Krasnodar, Russia to work on the main college in town called Kuban University. As the XA CSU directors, the Bankes felt that they needed to lead the way in this vision and led the first team in Russia for the academic year.

To send a note of encouragement to Nathaniel and Lindsey, click the button below.